By Kristin Palpini, The Berkshire Eagle 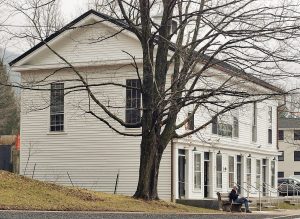 WEST STOCKBRIDGE — A recent spill of hundreds of gallons of oil at the Old Town Hall has been mostly cleaned up, but it also has complicated the ongoing renovation of the Main Street building.

The spill from the building’s oil tank was discovered Jan. 26, when Fire Chief Peter Skorput smelled oil from outside the building and traced the odor to the Old Town Hall, according to Robert Salerno, chairman of the West Stockbridge Historical Society, which owns the building.

“It wasn’t the Exxon Valdez or the Deepwater Horizon [oil spills] — it was bad, but not that bad,” Salerno said. “It was a lot to deal with.”

The 1854 Old Town Hall is undergoing extensive renovations to turn the space into a community center. Over the past year, an extension was added to the building that contains an elevator providing ground-level access to the second floor, which has a performance space. New bathrooms also have been added, and plumbing and electrical wiring has been improved.

More work is planned, and the building hosts musical and spoken-word performances as well as community events like BerkChicque, a used designer-clothing fundraiser for local arts and culture programs.

The Massachusetts Department of Environmental Protection is investigating the spill and monitoring the cleanup.

In anticipation of frigid weather in late January, the Historical Society put about 250 gallons of home heating oil in the tank, Salerno said.

It turns out that the 165-year-old foundation below the oil tank had been damaged by recent heavy rain that undercut a support below the tank.

When the freezing weather hit, Salerno said, the weight of the oil shifted the tank an inch or two, breaking a valve on the tank and spilling hundreds of gallons.

Engineering firm J.H. Maxymillian was called to remove the oil.

“They showed up with the biggest vacuum cleaner you’ve ever seen — a vacuum truck — and took five barrels of oil out,” Salerno said.

Lipton Energy, the building’s oil supplier, put a temporary tank in the building to get it through the winter, he said.

Last week, Maxymillian returned and removed 6 inches of soil from below the tank that could have been contaminated.

Salerno said he is not sure how much the spill will cost the Historical Society.

“We’re waiting for the lab tests to come back to make sure we’re cleaned up and we can sign off with the DEP on what happened,” he said.

Salerno said support from the community during the emergency was terrific.

“We really lucked out with Peter and Bob and we lucked out again with Maxymillian and Lipton — it’s just been incredible.”

Entire Article at The Berkshire Eagle