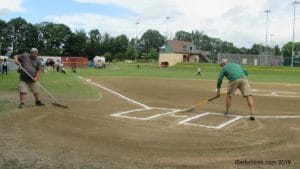 Parks and Open Spaces Manager James McGrath told the Parks Commission on Tuesday that Maxymillion, the chosen contractor for the project, will cover the cost of the project.

“Kudos to them for stepping up and helping,” he said. “That is really a very generous donation.”

The project was originally a Community Preservation Act project that went out to bid like any other. McGrath said Maxymillian was the chosen bidder and indicated to the city that it wanted to donate the project.

The project would address two fields in the complex and with Maxymillian’s donation, the city now has the original $17,000 from the CPA funds to play with.

McGrath suggested using the funds to address repairs at some of the other dugouts in the facility.

“Roofs, privacy slats, and other things,” he said. “Maybe get some new hardware for these dugouts. They are well used and well loved.”

He said if the commission wants to put these funds toward something else it will have to seek permission from the Community Preservation Committee because it only authorized the funds for Doyle.

City Council will have to accept this donation at a future meeting.

McGrath also said the Burbank Park Dog Park design work continues and he hopes to have a final draft ready for the commission’s March meeting.

“The ad hoc committee has done some great work that you will see,” he said.

McGrath said if the cost estimate comes in higher than the grant amount, the commission will have to make some design decisions.

“Like a chain link fence may be the most desirable but if it is too much, we may have to look at something cheaper but comparable in strength,” he said.

There was a concern among the board about added maintenance with a new park within the city limits and McGrath agreed that this is true and that was considered in the design work.

“We know we could use some additional park maintenance people and there may be some activity from the administration for that but we really designed this to limit the amount of maintenance needed up there,” he said.

He added that they will look to create a friends group to help maintain and advocate for the park.

“These will be folks who are dog park users who are keen on the dog park and who want to be involved,” he said. “Who want to be the eyes and ears and to some degree conduct the day-to-day maintenance.”

McGrath gave an update on the Iraq/Afghanistan monument to be installed in Veterans Way Park.

“They are on a forward track, fundraising is going OK so far, more to come, but they are on track for that September unveiling date,” he said. “It is an important project and one I think the community supports.”

McGrath said the VFW is about to unroll a paver fundraising campaign but has already received individual donations as well as a $15,000 donation.

Once the design is completed, it will come before the commission for final approval.

The commission also approved a slate of facility use requests:

• The Eagles Community Band plays at the Common June 23 and Aug. 18 from 7 to 9 p.m. and at Springside Park on July 21.
• Shakespeare in the Park performs on the Common July 13 through Aug. 13.
• The Vietnam Veterans will holds a Memorial Day ceremony at Park Square on March 28 at 10 a.m.
• The Kiwanis Bike Rodeo and Safety Day will take place on the Common on June 14 from 11 to 2.
• BEAT and HVA will host Housatonic River cleanups June 13 and Aug. 1 from 8 to 2.