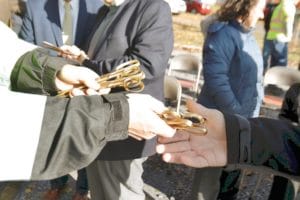 STEPHANIE ZOLLSHAN — THE BERKSHIRE EAGLE
Gold scissors are handed out for the ribbon cutting ceremony at the Narraganset Avenue bridge over Pontoosuc Lake in Lanesborough on Friday, November 1, 2019.

LANESBOROUGH — Neighbors and commuters have been using the new Narragansett Avenue bridge since the end of summer, but at its official ribbon-cutting Friday, local and state officials talked about the collaboration effort behind the $6.7 million project.

It was the late state Rep. Gailanne M. Cariddi who got the ball rolling on the replacement of the dilapidated structure that connects a neighborhood in the northwest corner of Pontoosuc Lake, officials said. While the structure is town-owned, money for the project came from the state.

“Today is Gail Cariddi’s birthday, ironically, while I’m up here as a state representative, it’s only carrying on her legacy and the work that she was able to get done for small towns like Lanesborough,” state Rep. John Barrett III said, while cars crossed over the lake behind him on the newly constructed bridge.

For about 150 residents, the bridge is the only way in or out of their neighborhood. It has also long been a spot for people to fish, bike, walk or launch their canoes and kayaks.

Because it had been a narrow structure, that came at an inconvenience to some drivers, said Francisca Heming, director of Massachusetts Department of Transportation’s District 1 region. The new structure, built by J.H. Maxymillian Inc., has 5 -foot-wide sidewalks and more parking in the area, she said.

“I cannot overstate how important it was for MassDOT and the town of Lanesborough to get this project done and get it right,” she said at the event.

Completing the project required overcoming a long list of logistical barriers, including seeking easements from neighbors and overcoming a conservation restriction.

Neal Maxymillian, president of his family’s company, talked about the obstacles that his crews had faced since spring 2017.

The bridge includes 200 piles that go 90 feet into the ground, he said. Construction included a difficult dewatering, the construction of a large temporary bridge, poor soil conditions and crews working through two cold winters, he said.

At the end of the day, though, the project was responsible for the creation of nearly 15 jobs in the region, he said to a crowd that included town officials and representatives from a variety of agencies, including the offices of Gov. Charlie Baker and state Sen. Adam Hinds.

“What I love about this bridge is that it demonstrates a lot of the link between the local effort and the state effort,” Hinds said at the site. “This is what it’s all about, making sure that government works towards improving lives of folks.”